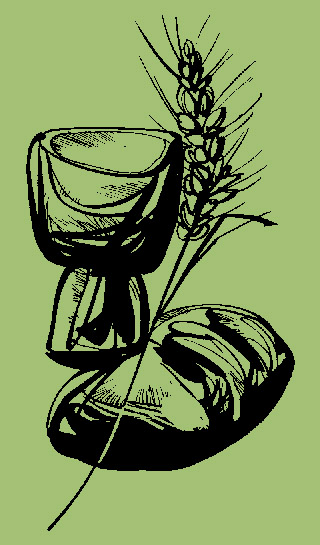 At Mass, we come together and are welcomed as a community. Jesus told us that we should not come to the altar if we have a quarrel with our neighbour and so we begin by seeking forgiveness for our sins before praising God in the Gloria. The Opening Prayer introduces the theme of the liturgy and we then listen to the Word of God in scripture, the Gospel or ‘Good News’ and hear it explained to us. Fed by the Word, we declare our faith and make prayers of intercession before bringing bread and wine to the altar along with the collection – symbols of the gifts we receive from the earth and the gifts or talents with which we ourselves are blessed by God’s Holy Spirit and which we offer back to God. Having prayed over the gifts, we come to what the Church describes as “the source and summit of the Christian life” – the Eucharistic Prayer where we recall Christ’s death and resurrection and, in the hands of the priest, the Body and Blood of Christ become present in bread and wine. After the great doxology of “Through Him, with Him, in Him…..” we pray the unifying prayer that Jesus gave his followers – the “Our Father”; to emphasise that we have been healed of sin and re-united with our neighbours we share a sign of peace before partaking in Communion – literally coming together to recall Jesus’ death and resurrection as he instructed the disciples at the Last Supper. The Eucharist may be the “source and summit” but it is difficult to live on the top of a mountain and so, after reflecting on the Eucharistic sacrifice, we are sent out in peace to love and serve the Lord. Alleluia!

The Catholic Bishops of England and Wales have published a lay person’s guide to the Church’s General Instruction on the Roman Missal – how the Mass is to be celebrated. It can be accessed here.

The power to transform
At Mass, the Holy Spirit is sent not only to ‘to transform the bread and wine, already symbols of our lives into the body and blood of Christ’ but also to ‘transform the lives of those who receive the sacrament into the Body of Christ, ever more united with one another in Christ.’

Catholic Bishops’ Conferences of England and Wales, Ireland and Scotland

Receiving Holy Communion
Exactly how people receive Holy Communion can differ from country to country. We are expected to observe the practice in England and Wales set out by the Bishops’ Conference and approved by the Church in Rome.

If we wish to receive from the Chalice, the minister, when we stand before them, will say ‘The Blood of Christ’ and we respond ‘Amen’.

In their document ‘One Bread One Body’ (76), the bishops say:
‘We are called to be one, and we seek together more urgently than ever before to be one band of pilgrims, united in faith and in love, in holiness and in mission. This makes us feel even more strongly the pain of our divisions, above all at the Eucharist when we are unable to share together as one Body the one Bread of Life.’

Catholic Bishops’ Conferences of England and Wales, Ireland and Scotland

Later, the bishops appeal to Catholics and to our brothers and sisters in other Christian communities to respect the discipline of our church.

We echo that appeal. Anyone who has not made their first communion or is not a member of the Catholic Church is very welcome to receive a blessing, joining the procession and coming forward with their arms crossed on their breast.

Bread and Wine
The Church teaches that Holy Communion has a fuller form as a sign when it is distributed under both kinds in the forms of bread and wine.
The Bishops of England and Wales encourage people to receive Communion under both forms, however, Christ, whole and entire, and the true Sacrament, is received even under one form and if we receive only under the form of bread or under the form of wine we are in no way deprived of sacramental grace.

‘Make your left hand a throne for your right, since your right hand is about to welcome a king. Cup your palm and receive in it Christ’s body, saying in response ‘Amen’. After partaking of Christ’s body, go to receive the chalice of his blood… Bow your head and say ‘Amen’ to show your homage and reverence and sanctify yourself by partaking also of Christ’s blood.’

This website uses cookies to improve your experience while you navigate through the website. Out of these, the cookies that are categorized as necessary are stored on your browser as they are essential for the working of basic functionalities of the website. We also use third-party cookies that help us analyze and understand how you use this website. These cookies will be stored in your browser only with your consent. You also have the option to opt-out of these cookies. But opting out of some of these cookies may affect your browsing experience.
Necessary Always Enabled

Any cookies that may not be particularly necessary for the website to function and is used specifically to collect user personal data via analytics, ads, other embedded contents are termed as non-necessary cookies. It is mandatory to procure user consent prior to running these cookies on your website.