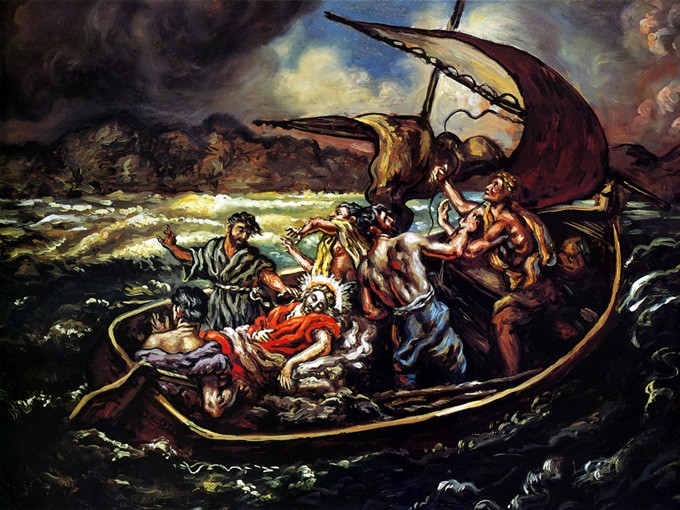 Pope Francis is issuing an encyclical on environmental concerns, especially global warming. While rightly emphasizing that what humans as a ‘race’ do to the planet, there is still a sense in which an individual cannot control the weather – cannot tell the ‘winds and the waves’ what to do. So in the 2000 years since our readings, one whom ‘the winds and sea’ obey would still raise the question posed in our gospel.

Job 38:1, 8-11
Job is one of the deepest explorations of the meaning of suffering that we find in the Hebrew Bible. It is, however, a book that is not easy to read and interpret, with long stretches of poetry, what seems to modern ears much repetition, and no simple explanation to why the innocent suffer. Instead a powerful call to trust an all-powerful and loving God. Our short selection today was chosen to give us a picture of how the writers of that time saw God behind the weather, and comes from the last part of Job, where God speaks to him out of the whirlwind.

2 Corinthians 5:14-17
We continue to read from this Letter St Paul wrote to the troubled community in Corinth, this the one reading today not concerned with boats and weather. But it does pick up how different life becomes when one knows Christ, not just as a human but as ‘something more’ and so provides one reflection to the question of the disciples we will hear in the Gospel.

Mark 4:35-41
This selection follows after the chapter of parables we heard from last week. After a day of teaching using the boat as a sort of pulpit, Jesus apparently seeks a break from the crowds who have been following him – and some of whom seem to have taken to boats as well. ‘Just as he was’ implies they did not stop to eat or take supplies with them to the other side. Jesus falling asleep, tired presumably after his day of teaching, is an example of Mark’s depicting Jesus’ full humanity.

Storms come suddenly on the Lake of Galilee (which Mark calls a ‘sea’). Fishers and boatmen would be used to that, but this seems to be an especially violent one and they fear drowning. This is the first time the disciples have called him ‘teacher’ perhaps in recognition of what Jesus had been telling the crowds. The words of their reproach are harsher than those used by Luke and Matthew who also tell this story, but Mark does not hesitate to show the disciples speaking with something less than reverence when addressing Jesus. It is not clear what they expect Jesus to do, certainly considering their surprise later they did not look for a miracle over nature. Perhaps it was a reaction such as that expressed in ‘all hands to the pumps’ – they feel the need of all the human help possible in trying to control the boat or empty the water flowing in. In such emergency situations words and actions are often simply an expression of the first emotional reaction. You want everyone alerted to danger, even when you don’t expect them to change anything.

‘Rebuke’ is the same Greek word used by Jesus in an exorcism. Is Mark suggesting that the storm was in the control of demons, or just a way of showing that the chaotic forces of nature responded to a controlling command?

Jesus in turn reproaches the disciples, but what he expects of their faith is not stated. From the perspective of later understanding of Jesus’ divine nature, we might think they should have trusted Jesus to take care of them, but Jesus as ‘Son of God’ would not have been in their minds at this early stage in the ministry. Jesus’ words may have been based on biblical calls to trust in God, such as those in the previous readings. Psalms 65:7 and 104:7 use the word ‘rebuke’ for God’s action of limiting the waters in creation. Storm and high waters as a metaphor for tribulation of the just from which God can save: Psalms 69, 18. Confidence in God, no matter how fearful events seem is in Psalms 46-1-3, also Isaiah 43:2. Sleeping untroubled is a sign of trust in Proverbs 3:24.

‘Filled with awe’ – literally in the Greek it is the emphatic ‘ feared with a great fear’ The translators probably note that in our language today we separate two senses of ‘fear’ as ‘reverence’ and ‘fright’. Controlling the sea is divine power in Psalm 89:9, so when the disciples raise the question they would be aware that someone more than a wise and good human has rescued them. Here as in other parts of Mark, there is a striking contrast, pairing transcendent power over the weather with the humanity of Jesus falling asleep.

A number of times in Mark, a question is asked about Jesus, but no answer given. It is the evangelist’s way of treating reactions to Jesus that should lead to a true faith. The disciples’ unanswered question is the end of the story and Mark may expect the readers as well to reflect on what it tells them.

This website uses cookies to improve your experience while you navigate through the website. Out of these, the cookies that are categorized as necessary are stored on your browser as they are essential for the working of basic functionalities of the website. We also use third-party cookies that help us analyze and understand how you use this website. These cookies will be stored in your browser only with your consent. You also have the option to opt-out of these cookies. But opting out of some of these cookies may affect your browsing experience.
Necessary Always Enabled

Any cookies that may not be particularly necessary for the website to function and is used specifically to collect user personal data via analytics, ads, other embedded contents are termed as non-necessary cookies. It is mandatory to procure user consent prior to running these cookies on your website.